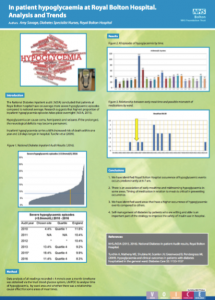 To try to tackle the problem they took data analysis of all readings recorded < 4 mmols over a month timeframe. They were obtained via the Trust’s blood glucose system, UNIPOC to analyse the time of the hypoglycaemia episode, the ward area and whether there was a relationship causal effect for some areas of meal times.

They were also able to identify ward areas that have a higher occurrence of hypoglycaemic events compared to others. As a result for some patients that are high risk, they advised to test earlier in the morning. We have also commenced work on a new capillary blood glucose chart with best practice guidelines and hypoglycaemia stickers for the patient’s notes.