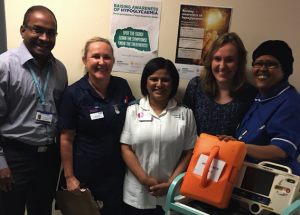 Sandwell and West Birmingham Hospital has a bed base of 850 patients and employs 7,500 people. It also has 38,000 admissions each year, go which one in three patients have diabetes and a third are insulin treated. NaDIA data in 2015/2016 highlighted poor hypoglycemia management in the Trust despite an overall improvement in hypoglycaemia elsewhere in UK.

According to a recent survey staff knowledge is poor in the hospital showing only 20 per cent  were aware of the Trust’s hypoglycemia guidelines and only 30 per cent were ‘somewhat confinement’ in managing hypoglycaemia.

The team used the issues raised to help identify objectives and solutions. They implanted the following:

During Hypo Awareness week, they carried out the following: