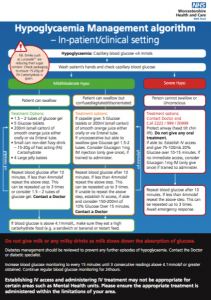 All areas of the Trust showed enthusiasm and wanting to be involved in the campaign, which was helpful as the Trust is the main provider of community nursing, therapy and mental health services across the county. These services include children and adult services including, community and in-patient settings such as services for mental health learning disabilities, and physical health, including six community hospital sites.

Chelsea Elcocks, clinical skills tutor as part of the Physical Health and Resuscitation team, said: “All staff members throughout the Trust were very positive and enthusiastic about Hypo Awareness Week. We also had a lot of involvement from our communications team, which included information within our newsletter and changed the Trust desktop for the week.”

During the halfway point of the week they had reached more than 50 teams, giving them information and hypo awareness packs. They also set up display boards across their main sites, included hypo awareness in clinical skills educational sessions and received more than 100 retweets on social media.

Chelsea added: “Thank you for allowing us to be a part of Hypo Awareness Week. We will continue to spread awareness of hypoglycaemia and diabetes, and look forward to being involved next year.”