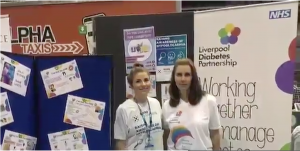 September they were at Aintree University Hospitals NHS Foundation trust with a display stand and hypo simulation head set. They interacted with lots of hospital staff, students and members of the public who found the hypo simulator really insightful. They had pre made jelly baby packets that were well received and they also had an activity for people to guess the correct hypo treatments from a range of choices. On the same day they were also at THE LJMU fresher’s fair at the Echo Arena, raising awareness about hypoglycaemia with a particular focus on those with Type 1 diabetes. They gave advice to student paramedics, the rugby team and offered support for the new fresher’s with Type 1 diabetes. It was the perfect opportunity to give information about the local Type 1 support group (LIVT1D). They had an entertaining visit from the Diabetes Times photographer at both events and their communications teams took some snaps, which made their way onto social media. On Thursday 27th their team mates were at The Royal Liverpool and Broadgreen University NHS Trust in the main foyer with another stand and hypo simulation head set.  LDP have been very active on their digital and social media platforms in the run up to and during the events to raise as much awareness as possible and they look forward to taking part again in 2019.