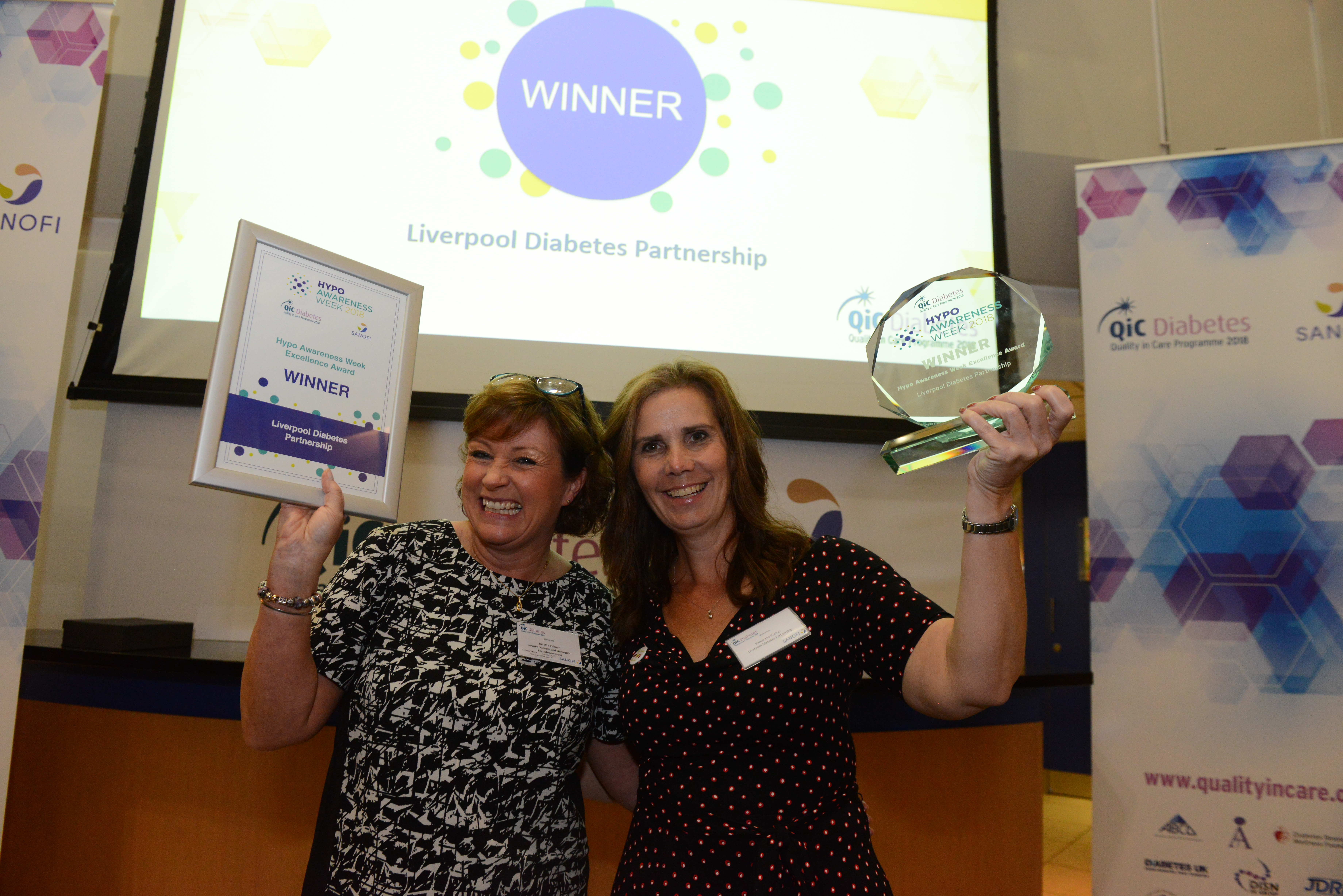 The Liverpool Diabetes Partnership and NHS Tayside have been crowned the joint winners of the 2018 Hypo Awareness Week Excellence Award.

They were announced as champions at the Quality in Care Diabetes Awards beating 22 other entries in the competition.

A total of 549 sites made up of hospitals and medical centres across the country took part in the campaign, sponsored by Sanofi, which took place between 24 and 30 September.

Becky Reeve, Head of Professional Relations at Sanofi Diabetes and Cardiovascular, said: “The teams showed a real commitment to go above and beyond to ensure important messages about hypoglycaemia were communicated. They obviously care a great deal about what they do and the patients that they look after. Their  passion, dedication and innovation displayed during Hypo Awareness Week were exceptional. We applaud their efforts.”

Judge Simon O’Neill said: “Many congratulations to both teams for running a significant campaign. I think it’s great to be able to give awards out like this, as so often diabetes teams don’t get the recognition they deserve for all the extra work they put in to really improve care.”

Judges praised the NHS Tayside team for launching a new initiative called ‘Adverse Medication Event – hypoglycaemia not resolved within one hour’, to address the historical challenge of hypoglycaemia being reported at the hospital

Debbie Voigt, a Diabetes Specialist Nurse at NHS Tayside, said: “This campaign has helped us raise awareness with multidisciplinary healthcare professionals to highlight the importance of managing and preventing hypoglycaemia in a timely and efficient manner.

“In Tayside we benefit from electronic linkage of blood glucose meters and SCI Diabetes which provides glycaemic data for all inpatient with diabetes. We look forward to tracking this data to demonstrate improvement following this campaign.”

During the week, NHS Tayside’s Diabetes Specialist Nurse visited acute wards in Ninewells Hospital with a trolley to engage with staff using blood glucose data, hypoglycaemia information, a hypoglycaemia board game and a staff questionnaire to identify strategies for improvment. A hypo box audit was also carried out.

During the week, the Liverpool team had a display stand at both hospitals in the city, Aintree University Hospital and Royal Liverpool University Hospital, where they interacted with hospital staff, students and members of the public. The campaign also saw them create a video and use social media to get key messages across.

Judges praised the team for taking the campaign out to the wider community by attending a student freshers’ fair at the city’s Echo Arena and use of a hypo simulation head set.

Vicki Alabraba, Diabetes Specialist Nurse at the Liverpool Diabetes Partnership, said: “We as a team are really proud to have won this award. It’s great that our campaign was so well received and it makes the extra work and organisation to make it happen so worth it. Above all though, our patients are at the heart of what we do and if our work helps to keep them safe then we are a happy team.”

The programme has been made possible with sponsorship from Sanofi. Sanofi has no editorial control over its contents.