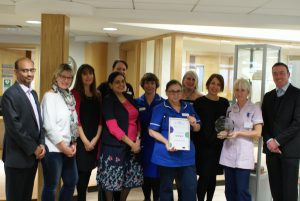 The judges were impressed with Hinchingbrooke’s efforts to promote awareness throughout the entire hospital and its open door policy giving other staff direct access to a Diabetes Specialist Nurse. Wallet-sized cards produced for staff and patients, giving details on identification and treatment of hypos, were also praised by judges.

Excellence Award judge Esther Walden, the chair of the Diabetes Inpatient Specialist Nurse (DISN) UK Group, said: “The award gives us the opportunity to showcase, promote and reward innovation and excellence during the annual campaign – and Hinchingbrooke team fully demonstrated these qualities in abundance. They excelled in raising awareness of hypoglycaemia during Hypo Awareness Week, going above and beyond and demonstrating a remarkable commitment.”

Fellow judge Simon O’Neill, Diabetes UK’s director of health intelligence and professional liaison, added: “Congratulations are well deserved. I think it’s great to be able to give awards out like this, as so often nursing teams don’t get the recognition they deserve for all the extra work they put in to really improve care.” 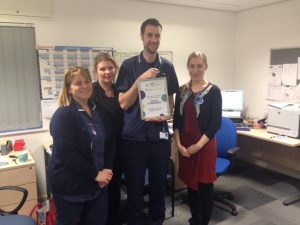 Knowsley Diabetes Community Service was ‘highly commended’ in the 2016 Excellence Award, with the Merseyside team being named runner-up.

The team was recognised by judges for its tremendous efforts in taking the campaign on the road to reach the community. Since its success, the Knowsley team has been trusted by Aintree University Hospital to be a pilot scheme for a specialist team to have its own Facebook page.