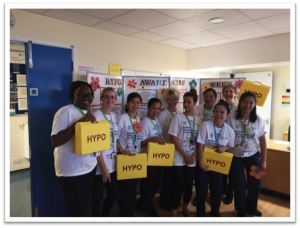 Care. Hypo is an acute complication of diabetes and Hypo Awareness week is a great opportunity and the first in the trust to make a long-lasting difference on hypo management. The team aimed to reach the majority of the healthcare professionals around the hospital and the public. Campaign stands were set up in three highly visible areas. It was superbly decorated highlighting information about hypoglycaemia. The week-long campaign focused on the updated hypoglycaemia algorithm and instigated the hypo box checklist. To ensure stocks were in date and promote staff awareness, all hypo box audits across clinical areas were undertaken during the week. To engage staff, they used the oculus virtual hypo experience, word searches and quizzes relating to signs and symptoms and management of hypoglycaemia. Also for fun, they were given opportunities to taste the glucojuice [the trust’s quick acting treatment for hypo] and spotted signs and symptoms of hypoglycaemia using board games. For patients and the public, home hypo treatment options such as orange juice and jelly babies were displayed and discussed. Information leaflets and pens were given away to reinforce knowledge acquired. Everyone showed enthusiasm and gave great feedback during the campaign. Pictures were taken and posted on social media and published in local newspapers to provide further awareness. The team were able to deliver three important messages: spotting the signs and symptoms of hypoglycaemia, treatment of hypo according to Trust’s Hypo algorithm and the importance of hypobox checklist.