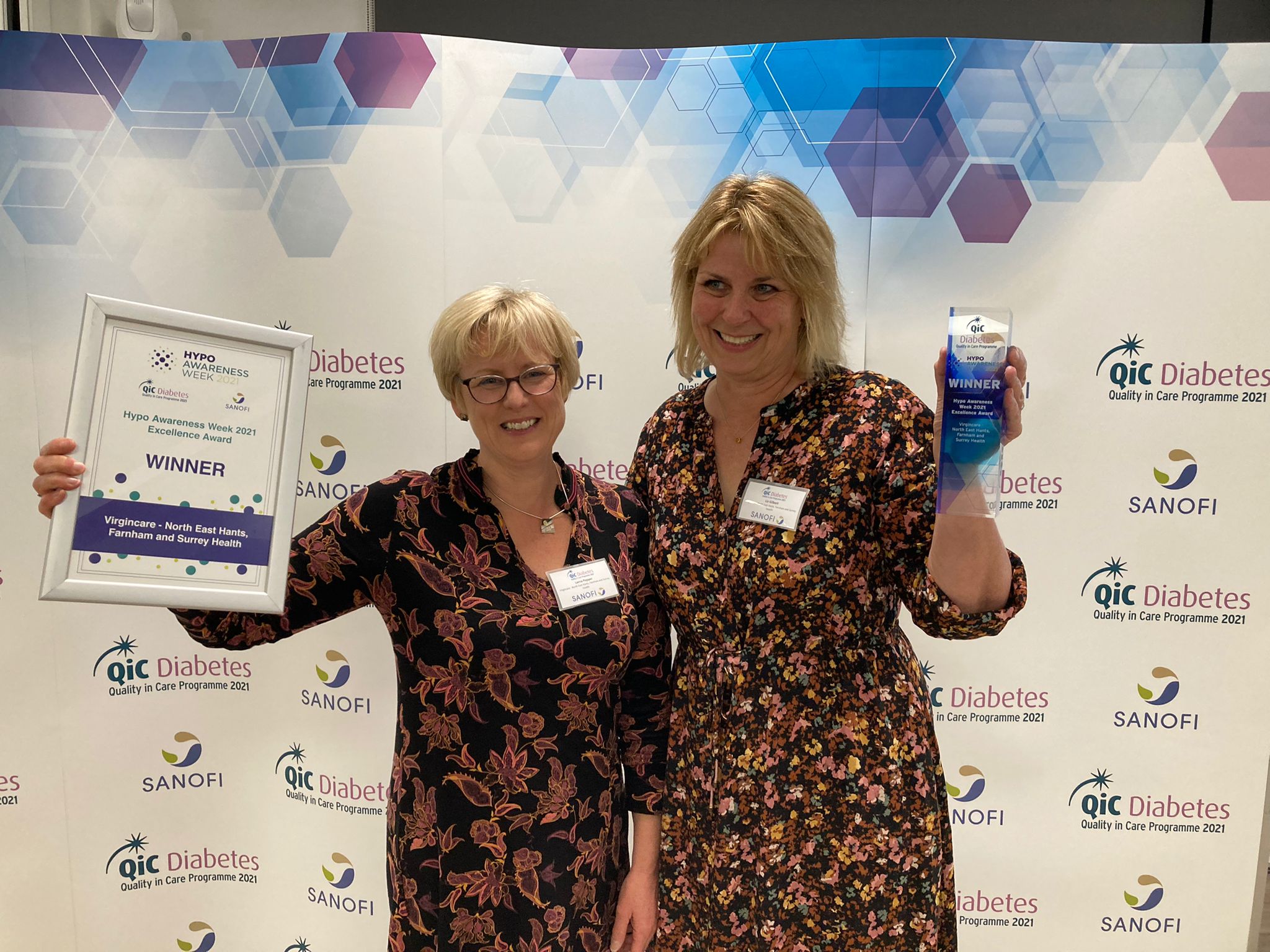 A Virgincare Community Diabetes Specialist Nurse (CDSN) team has won the outstanding award for boosting awareness of a diabetes complication.

The Virgincare CDSN team in North East Hants, Farnham and Surrey Heath has been presented with the Excellence Award for their management of a campaign to raise awareness of hypoglycaemia and diabetes aimed at health care professionals.

The CDSN team received the Hypo Awareness Week award at the Quality in Care Diabetes Awards, beating the seven other entries.

360 sites across the UK took part in the annual Hypo Awareness Week, from 13th to 19th September, to spread knowledge and familiarity of hypoglycaemia.

Their campaign incorporated methods such as half an hour ‘bite size’ sessions, articles in newsletters, a diabetes walk, and utilising social media to achieve their goal of providing information and skills surrounding hyperglycaemia to over 100 health care professionals.

Liz Gilbert, Diabetes Nurse consultant and Clinical Lead at Virgincare NEHF & SH said: “I am immensely proud to be part of such an amazing team of healthcare professionals at Virgin Care. The enthusiasm and passion to provide excellence in care is inspiring.”

She continued: “The feedback from staff has been amazing, overwhelmingly positive with requests for more ‘bite size’ teaching sessions… following attending one of our sessions a community nurse found herself in a situation where the patient she was visiting was having a ‘full on’ hypoglycaemic event… The nurse dealt with the situation effectively with a successful outcome. She reported back that the hypo awareness session had refreshed her knowledge and improved her skills in the management of hypos.”

Head of Professional Relations at Sanofi Diabetes and Cardiovascular, Becky Reeve, said: “The team really did go above and beyond in their campaign and worked hard to communicate the importance of hypoglycaemia awareness. A big congratulations to the Virgincare team for winning the award, well deserved after the enthusiasm and commitment they displayed throughout Hypo Awareness Week.”

In charge of choosing the winner was Emily Mayhew, Campaigns and Events Manager at Orange Juice Communications. She said: “A big well done to Virgincare for their successful campaign and winning the award. They really deserve the recognition for highlighting the importance of spreading awareness about hypoglycaemia.”

The programme has been made possible with sponsorship from Sanofi. They had no editorial control over its contents.